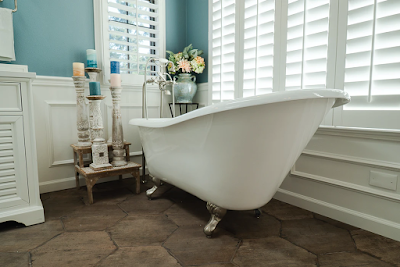 When someone has run a bath, and closed the door, one hears nothing from within, except occasionally the sound of a slight movement, like the dip of an oar in a lake at night. All is silence. All is peace. But from a shower there comes only noise, splashing and slapping and jumping about, and occasionally a voice breaking into, not the gentle lilt of the true bather who sings softly, but raucous and jolly snatches of songs from the locker room.

It is no wonder that Americans have a reputation for being always on the go, never able to take things quietly for very long, if they start the day by standing upright for five minutes under a jet of water, which they deliberately aim at themselves.

- From "The Importance of Bathtubs" in Bite the Hand That Feeds You: Essays and Provocations by Henry Fairlie

[Photo by Nik Owens at Unsplash]