Rules are Made to Be Broken? Sometimes, It Goes Even Further. 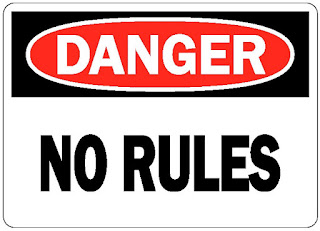 Let us explore the saying: "Rules are made to be broken."

There are some rules that we hope will never be broken. Marital fidelity and certain safety rules come to mind. In those instances we want the rigidity of a rule and not simply a strong suggestion. That is, after all, the reason for the word "rule." Even the dictionary, however, puts in some weasel words. Note the definition from The American Heritage Dictionary:
You could, to borrow a line, drive a truck through some of those. A very large truck.

Okay, so we know there will be plenty of times when rules will have exceptions, perhaps even desirable ones. A characteristic of leadership can be a willingness to break rules to achieve the mission but if the exceptions overwhelm the rule, then there is no rule.

There is another aspect that is even more interesting. Sometimes, rules are expected to be broken but the rule serves as a speed bump or a filter so the exceptions do not become commonplace. Consider prohibitions against torture. Just as an honest person may lie to a terrorist, a person who loathes the very concept of torture may concede that there are extreme instances - such as the classic where a terrorist knows the location of a hidden nuclear weapon that will take out New York City in an hour - where torture may be justified. The fact that an important rule has exceptions does not mean that the rule is not important, In that role, a rule serves as a restraint and not as a rigid barrier.

And a restraint is not a minor thing. Civilization depends upon it.

But we also depend upon what is called "street justice."

That is the subject for another day.
Posted by Michael Wade at 4:00 AM

Lately I've been fascinated with the final century or so of the Roman Republic. There were many causes of the death of the representative system of government, but among them were the breaking of rules which had been laid down by the traditions of the Roman ancestors.

Marius allowing those without land to serve as the rank and file in the army.
Sulla's march on Rome and dictatorship.
Using the senate votes to allow citizens to be appointed to positions before being old enough.

There are lots of other examples, but the pattern I see is an increasing disregard of the rules lead to a removal of the constraints placed on the army. Once this was done, rule became a result of control of the army, which ended the republic and began the Empire. Eventually the norm was the strongest general became the emperor.

The interesting thing is as these rules were broken along the way there were always those who warned of the dire consequences of breaking them. History, I believe, vindicated their opinion.

It reminds me of Daniel Moynihan's assertions about lowered standards. These things creep in and ultimately make massive changes.