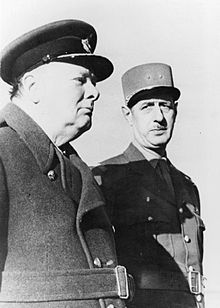 It is easy to conclude that Winston Churchill and Charles de Gaulle would not have attained the highest position in their respective nations had there not been a crisis. [I believe that Churchill's second prime ministership should not count because by then he was a former prime minister and a national hero.]

Are there any circumstances in which such types of leaders can attain the top job without a crisis or a perceived crisis?

I believe that people do not opt for the unusual or eccentric leader unless there is a compelling reason to do so. When the waters are calm, they will choose a B or even a C leader over an A+ one because (1) they don't know the person is an A+ leader and (2) the B or C types seem to be safer choices.

The extraordinary leader may perceive that the waters are not truly calm, but until others agree with that assessment, their chances of attaining the top spot are small.
Posted by Michael Wade at 9:05 AM

I've been reading a lot about US Grant, working on the Ron Chernow biography of him right now. Talk about an unlikely man to ever become a national hero and president, he was about as obscure an individual as possible to contemplate when the Civil War broke out.

History hasn't been kind to his presidency, but lately he's been rehabilitated quite a bit as the current mores smile more upon his strengths (especially his sympathy for the former slaves and willingness to help them during reconstruction) and care less about his weaknesses (his drinking and too easily trusting nature). Looked upon with a certain light his presidency could be considered to be a more modern one than almost any other of his era, similar to how his skill as a general presaged modern warfare far more than his Napoleonic contemporaries. We will see how he is viewed in another 20 years or so.

Grant is a great example of a person who could have been ignored. He was able to rise through his skill and the crises produced by McClellan's incompetence.

I also think his presidency has been underrated.