"Seven Years of College Down the Drain" 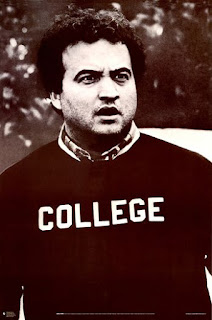 BloombergBusinessWeek on the coronavirus-based challenges for colleges.

I was taken by the picture at the top of the article. During the 1970s, a high school friend of mine went to Hampshire College, and I visited him there several times. The building in the photo doesn't look familiar, but the hills in the background do; we used to hike (and camp - probably illegally, but I'm not sure) in those hills. One of the hills had a fire tower on it, and I remember climbing it on a cool autumn morning just before dawn when the Connecticut Valley below us was filled with fog. Funny how images can jog your memory ...

I think it was Shelley Berman who once mentioned how certain terms, such as skate key, can evoke a flow of memories. The same certainly applies to pictures.

And notice how you remember it: cool autumn morning.

You even recall the temperature!