What? No Special Gyms? 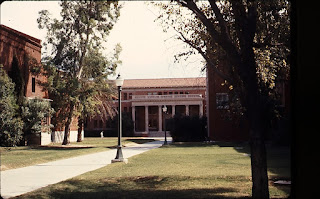 I lived in a dorm for most of my college years. It had been built in the 1920s and had thick walls and radiator heating in the rooms and - although this was in Arizona - no cooling system whatsoever. It had sleeping porches in-between the separate two-person rooms. Bathrooms were communal. There was a payphone in the lobby but no phones in the rooms. Televisions were not allowed but radios and record players were permitted. There was a single phone on each wing and it was operated by an operator at the front desk. Each room had a buzzer system that would let you know if you were wanted in the lobby or had a phone call. You could lock your room but the doors to the dorm were never locked which was fine because some of the scholars would come in drunk at odd hours.

There was a ping-pong table in the basement near some candy and Pepsi machines. There was a washing machine room that was sort of scary.

The lobby had a fireplace and a television and the type of mission furniture you'd find in motels if you traveled throughout the West in the Thirties or Forties.

Once a week there was room inspection and you could trade in your old bed linen for clean sheets.

In other words, it was nothing special. It had, however, one of the highest return rates of any dormitory and an eclectic group of residents. Someone working on a doctorate might be rooming with a freshman or sophomore.

There may be a business model here. I'm waiting for a university that will cut the frills in both the courses and the campus facilities and chop most of the administrative staff.

My guess is that many students today would go for that spartan environment. It would certainly leave more money in their pockets.