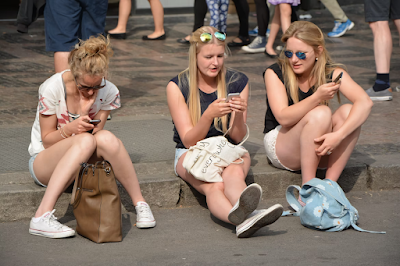 The first signs of the next shift began to reveal themselves to me on a spring afternoon in the year 2000. That was when I began to notice people on the streets of Tokyo staring at their mobile phones instead of talking to them. The sight of this behavior, now commonplace, in much of the world, triggered a sensation I have experienced a few times before - the instant recognition that a technology is going to change my life in ways I can scarcely imagine. Since the practice of exchanging short test messages via mobile telephones has led to the eruption of subcultures in Europe and Asia. At least one government has fallen, in part because of the way people used text messaging. Adolescent mating rituals, political activism, and corporate management styles have mutated in unexpected ways.

- From Smart Mobs: The Next Social Revolution by Howard Rheingold

[Photo by Beth Macdonald at Unsplash]