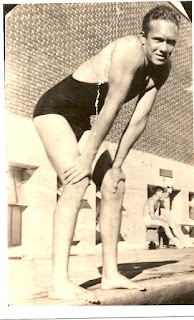 Some of William Conrad Wade's favorite expressions and bits of advice:

"You're a day late and a dollar short."

"I don't want to hear any alibis."

"You send them to school and they come back dumber than when they left."

As I get older, I find myself borrowing many of these.

"Tell 'em to go to hell." is great fatherly advice. My dad would offer similarly liberating guidance: "F*!k 'em if they can't take a joke." I let me know that there were people out there who didn't get it and I shouldn't waste time trying to figure them out.

That is a very important lesson. Often with those people, understanding is a one-way street.

My father used some colorful expressions. In my mind I can still hear him saying them. "Not for all the tea in China" was one he used. If he was doubtful about a proposition he might say, "Given the choice between that an a kick in the shin, I'd have to ask your boot size." "Never order a dish called 'surprise' or 'delight'" was another saying of his, and it often came out as an expression of disapproval of a course of action, as in "I never order a dish called 'surprise' or 'delight', and I never ____ ."

We seriously considered putting "Tell them to go to hell" on my father's tombstone.

Such wisdom stays with you.