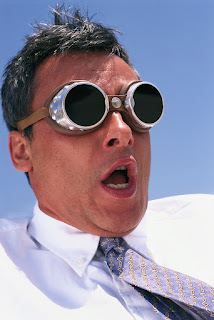 They insisted that I remove my glasses

Around a year ago I had a passport renewed and received the sad news that I could not wear eyeglasses for the passport photo despite the fact that, being as blind as the famous bat, I wear glasses almost all of the time. The result was a photo of some leg-breaker straight out of The Sopranos; not the sort of person you'd want to let past Customs.

I recently went in to renew my driver's license. Once again, the no-glasses rule was applied. This time, a photo of a villain from one of the Ghostbusters films emerged.

It will be interesting to see how this works out in the field. In the old days of IRA bombings in London, whenever I went to Britain I was invariably and politely taken aside for questioning; an interruption which amused friends and family. Now that I have a passport photo which could be reasonably described as menacing, the old days may be revived.