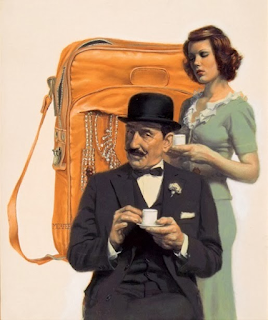 As a long time Poirot fan, the only thing I don't like about Suchet is the mustache. He makes it work for his interpretation of the character, however the mustache is generally described as magnificent by Christie, and in the series it looks more dantified. I picture a broad sweeping mustache as in the link below. I always harken back to the one short story where Poirot sympathize with everyone who attempts to grow a magnificent mustache such as his.

That's interesting. I noticed in the Suchet series that Poirot's mustache was very curved at the beginning and then less ornate shortly thereafter.

They must have heard from Poirot fans but it never got to the point of being magnificent.