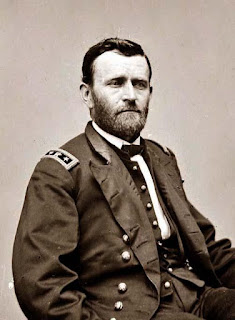 President Lincoln telling one of his assistants about General Grant:

"Well, I hardly know what to think of him. He's the quietest little fellow you ever saw . . . He makes the least fuss of any man you ever saw. I believe two or three times he has been in this room a minute or so before I knew he was here. It's about so all around. The only evidence that you have that he's in any place is that he makes things git! Wherever he is, things move!"

- From The Man Who Saved the Union: Ulysses Grant in War and Peace by H. W. Brands
Posted by Michael Wade at 7:00 AM

You bet. He was a great man.

Indeed for most of my young adulthood Grant was ranked as one of the worst Presidents in US history. Now he's consistently ranked in the top half. I think the battles he thought especially for racial equality have become more important did they were once considered. Something to think about when we see current presidential rankings.

You're right. Grant has not gotten his just due for years. He's one of my heroes.