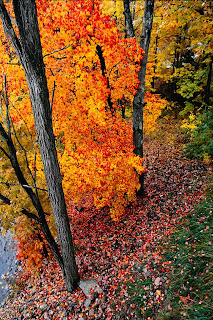 One golden autumn morning 100 years ago, a few blocks from where I’m writing these words in northwest Washington, D.C., Ambrose Bierce said goodbye to his secretary, turned the key in the door to his apartment on Logan Circle, and went off to God knows where.

Read the rest of Andrew Ferguson on the "brave life and mysterious death of Ambrose Bierce."

[You may recall that Carlos Fuentes wrote a novel on Bierce's experience in Mexico. It was later made into a film.]

Bierce's noted wit is at its best in The Devil's Dictionary. Great stuff.
Posted by Michael Wade at 7:50 AM

One of my favorite writers. And a good sketch, if somewhat softer than the subject.

The reference to "Chickamauga" included a colorful line or two but resisted a display of Bierce's horrible image. When the boy playfully jumped on the man's back as he had often played horsie at home...

"To him it was a merry spectacle. He had seen his father's negroes creep upon their hands and knees for his amusement--had ridden them so, "making believe" they were his horses. He now approached one of these crawling figures from behind and with an agile movement mounted it astride. The man sank upon his breast, recovered, flung the small boy fiercely to the ground as an unbroken colt might have done, then turned upon him a face that lacked a lower jaw--from the upper teeth to the throat was a great red gap fringed with hanging shreds of flesh and splinters of bone. The unnatural prominence of nose, the absence of chin, the fierce eyes, gave this man the appearance of a great bird of prey crimsoned in throat and breast by the blood of its quarry. The man rose to his knees, the child to his feet. The man shook his fist at the child; the child, terrified at last, ran to a tree near by, got upon the farther side of it and took a more serious view of the situation."

That description was so vivid when I first encountered it in my twenties it has haunted me ever since. It's the prose equivalent of a horrible sight that one can never "un-see". And to make matters worse, we learn in the final lines that the child was also deaf, which explains why he was not aware that a battle was in progress not far away.

I think Bierce had a case of PTSD which scarred him for the rest of his life.